After witnessing a mysterious train crash, a group of friends in the summer of 1979 begin noticing strange happenings going around in their small town, and begin to investigate into the creepy phenomenon. Made for may I suggest a new title for "Super 8?" Howabout "Just Okay 8?" 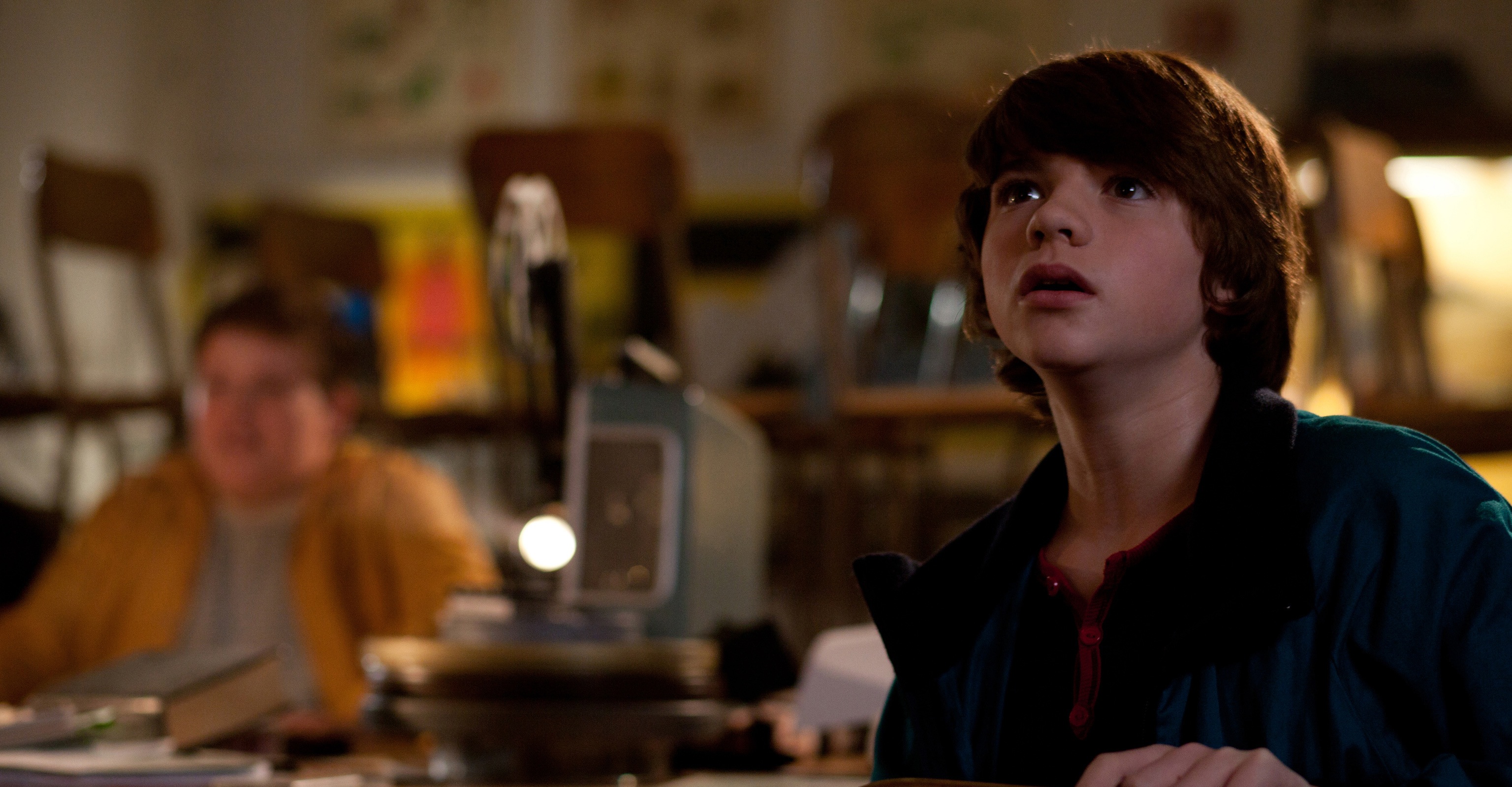 Directing/Writing
Writer/Director J.J. Abrams might as well have been tag-team directing with Steven Spielberg (who is one of the five producers here), since so much of this – the directing, the composition, the writing, the music, much of the plot, the ending, and hence the feel of this movie – is reminiscent of E.T. The Extra-Terrestrial, albeit a sugar-free version. In fact, the comparisons to E.T. are so many that just listing them reads like a Spoiler Alert:
– a young boy is dealing with the loss of one of his parents
– and therefore is raised by a single parent
– in a suburban area
– with a group of “Our Gang” type buddies
– who get around their neighborhood pretty well on bicycles
– while trying to uncover a mystery
– aggravated by a group of military-types who are running the show

Oh yeah; and an alien is stuck on our world and it’ s desperate to get home and the young man in question grows up and deals with the loss of his parent via his dealings with the alien whom he helps to leave the earth while couched in a soaring musical score with the whole town and Our Gang looking on in amazement.

Now if we were playing Trivial Pursuit and I’d given you any three of those points, you probably would’ve guess E.T., right? Not if you knew the rest of the points, mainly:

– the alien crash-landed on our planet, and has been tormented by its human captors for years.
– these humans very little regard for the humans involved; misleading them at every turn, and imprisoning or killing the uncooperative
– not cute at ALL, the rather nasty looking alien arachnid is now pretty upset with us after its treatment at our hands, so much so that it kills and eats quite a few humans on its way off the planet

Now THAT kind of takes away all of the heartfelt wonder that so made E.T. The Extra-Terrestrial so moving. Seriously; was there a dry eye in the theater when E.T. was thought to be injured or dead, or when he actually went home? But in Super 8, we can’t wait for this thieving, murderous, off-world outer-spaced spider to get the hell OUT of here. We find out very precious little about the alien and its motivations, even though there’s a silly “physic connection” idea to to let us (eventually) know what’s on its mind. Too little too late, I say; and good riddance to it, even if we messed with it for years.
It’s this odd combination of horror/creature flick and E.T. that ultimately makes Super 8 disappointing; all of this Wonder Years type awe… for a cosmic spidery slasher. It also wraps up WAY too quickly near the end for a nearly two-hour movie, with very little of the resolution you’d expect, and almost crave after such a set-up. It just sort of …ends.

Acting
The acting is what helps to set Super 8 in an E.T. mode; primarily made up of young cast members, they all do well, and really pull you into their tween world of who likes who, and who is a good friend and who is just being bossy. Elle Fanning – Dakota’s sister – really shows ‘em all how it’s done. Meanwhile, the adults fare well too, with Kyle Chandler having a particular intensity to reckon with, outshining most of the other adults onscreen (although they don’t have as much screen time anyway).

Video & Audio Production
This movie looks and sounds great on a “modest” budget of 50 million, often opting for a bit of an (again) Spielbergian touch of not quite showing the beastie until towards the very end, a la Jaws. The movie’s early theme has plenty of space in it, also reminiscent of Jaws’ theme, while the songs sprinkled throughout are well-chosen and even better timed.
As a bit of a side note, I saw this movie utilizing the D-Box seats of the Megaplex theater chain, and although I recommend them for a total immersion experience for any kind of action flick, I don’t recommend the highest setting. It can toss you around pretty good, and actually made me feel like I watching a movie whilst on a roller coaster. Low to medium setting is much better. They are also not as comfortable as regular seats, so any movie lasting longer than 90 minutes might end up being a bit of chore.

Effectiveness
The overall tone and end-result effectiveness is the problem with Super 8. There is very little emotional payoff after such a well-done and Spielbergian E.T.-like set up. The ending feels strangely rushed for a two-hour movie, and the twist in which our young hero “links” with the alien hits a silly note, especially considering what the alien has done up to that point, and how its anger may be justified considering our treatment of it. The whole last act belies not only the tone, magic, and quality of the first two (which was the strength of the movie, and the reason for my rating of it), but any suspension of disbelief turns a bit sour when it finally gets to it’s dissatisfying conclusion. See it if you must, but then go see X-Men: First Class and have much more fun at the movies.

Overall Score from Rich Bonaduce:
2 out of 4 stars