Tearfully boring and never lives up to its title. 'Sing' is the third worst film of the year. Made for anyone looking for a babysitter-movie to throw their kids into while they see something worthwhile.

Rated PG for some rude humor and mild peril. 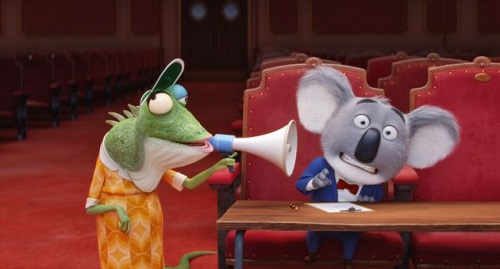 Two movies released near the end of this year were over publicized prior to their release. And, unfortunately, neither lived up to the hype.

Fantastic Beasts and Where to Find Them has its fans, but the film was nothing more than a barely serviceable pilot to set up a new batch of Harry Potter films. As for Illumination Entertainment’s Sing? It makes The Secret Life of Pets look Oscar worthy. As much as I enjoyed Pets, it’s not. But compared to director Garth Jennings’s failure here — it breaks my heart that this came from the same director who gave us The Hitchhiker’s Guide to the Galaxy and Son of Rambow — I will happily pop Pets into my player any day over Sing.

Buster Moon (voiced by Matthew McConaughey) is a koala with big dreams. After falling in love with the theater at the age of six he’s managed to make his dream a reality. Except that now, his theater is flailing and he’s strapped for cash. One day, Buster comes up with a brilliant idea to save his theater: he’s going to put on a singing competition, offering a grand prize of $1,000 — but accidentally prints out fliers advertising $100,000.

Now, everyone in town is vying to win: Rosita (voiced by Reese Witherspoon), a bored housepig who just wants her moment to shine; Mike (voiced by Seth MacFarlane),a scheming mouse with an ego as big as he isn’t; Ash (voiced by Scarlett Johansson), a porcupine rocker who just wants to get out of the spotlight of her partner Lance (voiced by Beck Bennett); and finally Meena (voiced by Tori Kelly), a young elephant with a fear of crowds who needs to find her voice.

To be fair, Sing at least has its heart in the right place. It’s just too bad it beats to such a boring tune. After suffering through Sing my wife said to me when it was over: “You look like you were being tortured the entire run time.”

For a movie called Sing that revolves around the old “let’s put on a show” plot, there are very few instances where we even hear complete songs. Trolls pulled the same stunt last month, but at least when it was cutting a song short, it was using the song for specific plot points. Here, songs simply start, then Jennings cuts to something going on off stage, then cuts back to the end of the song.

Then there’s the fact that Buster’s whole plan makes no sense whatsoever. He’s putting on a contest, with a monetary prize, to save the theater he’s making no money on? I know it will go right over kids’ heads, but c’mon.

The long and short of it is, Sing is one of the worst films of the year with no laughs, no loveable characters, and no memorable songs whatsoever. I feel sorry for anyone who is dragged to it by their children. Don’t let their bleating mouths con you, Sing is a good time for no one but the most easily amused. Don’t say I didn’t warn ya.