Is it one of the year’s absolute best? I’m afraid it’s not quite that good. Made for audiences salivating for a thinking adult thriller. 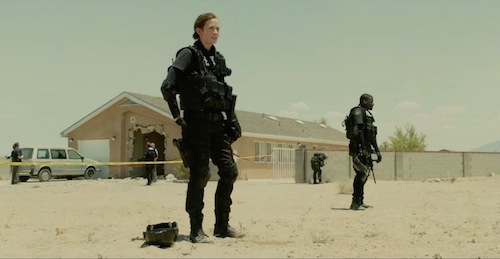 The buzz surrounding the new war-on-crime film Sicario is at an almighty high. Every TV spot is declaring how good it is. It helps that the film is from Denis Villeneuve, Oscar-nominated for his Canadian film Incendies, who received further acclaim with his Jake Gyllenhaal/Hugh Jackman thriller Prisoners. With the help of three A-list stars — Emily Blunt, Benicio del Toro, and Josh Brolin — Villeneuve manages to make good on the promise of a film you might not soon forget. But is it one of the year’s absolute best? I’m afraid it’s not quite that good — at least as a whole. And if there’s anything we’ve learned from the Academy, one spectacular performance does not a Best Picture make.

Diving right into the action, we’re thrust into the middle of a hostage situation where FBI agent Kate Macer (Blunt) leads a raid on a quiet house in Chandler, Arizona seemingly devoid of life. What they do find is 42 dead bodies hidden inside the walls. A bomb also goes off in a shed outside killing two agents. Kate wants to find the people responsible and her boss Dave Jennings (Victor Garber) convinces her to volunteer to help Matt Graver (Brolin) and Alejandro Gillick (Del Toro) find the elusive drug lord Manuel Diaz (Bernardo P. Saracino). Now, tension at the border is sky high with Kate questioning Matt and Alejandro’s motives, with the passing days becoming more and more dangerous before ulterior motives begin to surface.

The best thing Sicario has going for it is, by far, Del Toro’s presence. Benicio is at the top of his game here, with a performance rivaling Javier Bardem’s ruthless killer in No Country for Old Men. Riveting and terrifying, Del Toro makes Alejandro a man so scary that “if looks could kill” is an understatement. As for the rest of the cast, Blunt’s Kate comes as a huge surprise as the film’s punching bag. She’s constantly put in harm’s way, just to further Matt and Alejandro’s quest to take down Diaz. Meanwhile, Brolin is becoming typecast and just seems to be playing Josh Brolin again. It’s a good thing he’s so damn charming.

Unfortunately, the one thing that does get in the way of Sicario is its pacing. At 121 minutes it feels way longer. There’s not a lot of padding, just a lot of plodding. Scenes are dragged out way longer than they should be, mainly just to show off Roger Deakins’s cinematography — and to allow Del Toro to make his performance as menacing as possible. This causes the finale to feel unrewarding. Some real crap goes down, but you’ll probably be too busy keeping yourself awake to wonder if what you just saw happen really did. However, the performances make it all worthwhile, so it’s definitely worth checking out. Between this, The Martian, and The Walk, it’s a fantastic time to be an adult at the cinema.