There have been, and will be, far worse movies this year. Made for Reynolds' fans, and anyone able to turn their brain off for two hours.

Rated PG-13 for sequences of violence, some sexuality, and language. 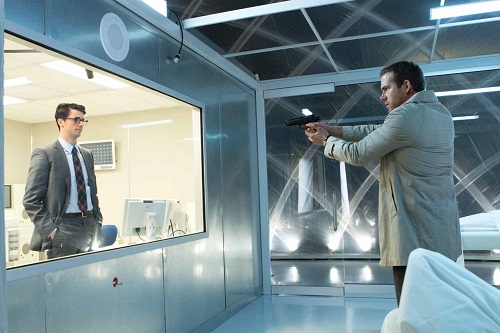 Body swapping movies are always hit and miss, and it seems like there’s always another one right around the corner. From the good: two Freaky Fridays, Like Father Like Son, Vice Versa, 18 Again, and Face/Off — to the bad and ugly: The Hot Chick, Wish Upon a Star, and The Change-Up — they always offer the same ol’ story. Lessons are learned and it’s a race against time to correct the time-honored plot device by the time the credits role.
Now, Ryan Reynolds is starring in his second body swap movie, Self/less, in a matter of just four years. Thankfully, director Tarsem Singh (The Cell) is back to making an entertaining flick, instead of just trying to assault our senses with surreal imagery (The Fall) or an assault on good taste (Mirror Mirror). With a bipolar screenplay by the Pastor brothers (David and Alex), they manage to have some fun with the concept, even while never offering anything new. If you can check your brain at the door — which, lets face it, is all we expect during the summer — expect to have a good time.

Damian (Ben Kingsley) is terminally ill, his cancer has spread to his liver and lungs, and he has less than six months to live. Having always been more concerned with his own empire than the well-being of his daughter Claire (Michelle Dockery), he is dying a lonely old man. His only friend is his business partner Martin (Victor Garber) who meets Damian at a cafe in New Orleans, where Damian seems to breathe his last breath.

It turns out, Damian has purchased a new body (Reynolds) from the mysterious Phoenix Biogenic, run by Dr. Albright (Matthew Goode), where they offer the chance to carry on their lives while having to leave their past behind. However, it comes with a side effect of someone else’s memories trying to take over, leading Damian to track down a woman and child who may hold the key, possibly putting everyone’s lives at stake.

The most off-putting thing about Self/less is its skewing from genre to genre. One minute we’re watching a semi-soapy drama, then we’re suddenly caught up in a shootout or car chase. It’s all just part of the Pastors’ plan to keep us entertained as we never know which button it’s going to push next. Singh also manages to pull a way better performance out of Reynolds than David Dobkin could in The Change-Up, but sadly, as good as Kingsley always is, his screen time never amounts to much more than a cameo.

The advertising only slightly gives away the film’s action sensibilities, but there is plenty to keep us on our toes. And the body swapping takes a scientific approach, instead of wishes made in Chinese restaurant bathrooms or peeing in a water fountain. Self/less doesn’t offer a lot of surprises or revelations, but the drama keeps you invested in the story, which thankfully never gets too far fetched. As I said, this is check your brain at the door entertainment, but there have been, and will be, far worse movies this year. Reynolds fans will have a blast.