Raiders of the Lost Ark

The 1981 action adventure hasn't lost an ounce of its charm. Made for everyone with a pulse and a heart for great movies.

for 'some material' that may not be suitable for children. 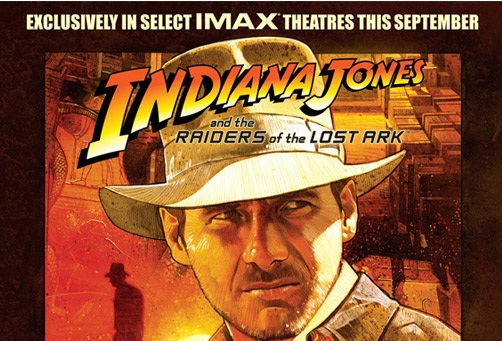 The first and only IMAX in Belgium closed in 2005. This was a screen in the original 15/70 format, which makes it extra sad that it’s gone for good. When “Raiders of the Lost Ark” (let’s never refer to it as “Indiana Jones and the Raiders of the Lost Ark”) was announced as an exclusive IMAX rerelease to celebrate the upcoming Blu-ray trilogy, yours truly – who just happened to be visiting New York City – lept for unbridled joy. Born three years after the release, I had never been able to sample and/or experience said movie on the big screen.

And rest assured, the big screen is where Indiana Jones belongs. The new restoration is nothing short of spectacular. Ben Burtt’s legendary sound design impresses across the board. The movie is a non-stop succession of sonic booms, clacky whips, repetitive pistol sounds and, yes, a Wilhelm Scream.

Sadly, the AMC theater was not filled to the brim, but those who were there thoroughly enjoyed the movie. For one reason or the other, people lauged while I wasn’t expecting them to laugh. When Marcus and Indiana toast on the success of the Ark recovery, the audience burst in laughter. Huh? Did they discover some unknown subtext? A relatively non-chubby, young Alfred Molina still gets one of the best comeuppances in cinema history and the destructive effects of the Ark are genuinely impressive, even if you’ve seen them so many times before on home video. Even though based on an old adventure serial, “Raiders of the Lost Ark” has become an influential movie in its own right: the scene were Indy points out to Marion where he wants to be kissed has even been copied by Amélie Poulain.

The biggest pro about “Raiders of the Lost Ark” is that it never feels dated. The effects remain top notch (including Toht’s demise), the quips will always be funny and the performances are more than ace. The whole thing makes a very strong argument for cinematic rediscoverings of gems from the past. “Raiders of the Lost Ark”, plus the three other movies, will be screened again, during a one-off marathon on 15 September in your local AMC theater. Not to be missed, if you have the chance.