Takes too long to get to the goods, by that time it's too little too late. 'The Big Short' this is not. Made for only the most hard up Clooney/Roberts/Foster fans.

Rated R for language throughout, some sexuality and brief violence. 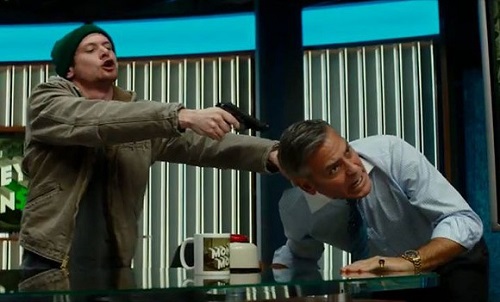 When you have Jodie Foster in the director’s chair and George Clooney and Julia Roberts starring, there’s a good chance it will be a fantastic time at the movies. Unfortunately, with Money Monster, it’s is not the case. A drowsy 40-minute setup is a long time to wait for a film to finally pick up the pace, and that’s exactly what happens here. Considering it took three writers to come up with the screenplay — Jamie Linden, Alan DiFiore, and Jim Kouf — you’d think Foster would have been able to ensure someone put some shine on it. But all we’re left with is another movie about big business and bigger money leaving the audience out in the cold.

Lee Gates (Clooney) is the star of a Mad Money-type TV show where he gives advice on what’s occurring in the stock market. The show may be ridiculous, but Gates and his director, Patty Fenn (Roberts), know how to put on a good show. What Gates doesn’t know, is that Patty took a new job across the street and that he’s in for the worst day of his life. The hot topic of the day is the $800 million dollars Walt Camby’s Ibis just lost. Now, Kyle Budwell (Jack O’Connell) has snuck on set to make Gates pay for the $60,000 bath he just took on Gates’ hot tip. Armed with a gun, and forcing Gates to wear a homemade bomb vest, Kyle is out for blood and wants to make sure Ibis pays for his bad luck.

Money Monster isn’t all bad. It’s just not very good either. It just takes a long time for the film to finally kick into a higher gear, but spends so much of it sputtering along that we never care about Kyle’s plight. Foster does what she can with the material, injecting some much needed humorous twists — Kyle’s baby mama is the funniest — but it’s all too little too late because why would anyone watching care that Kyle decided to flush all his money down the toilet? And why would we care about Gates’ life?

Thankfully, the performances are as good as you’d expect — Clooney and Roberts still have a little chemistry leftover from their Ocean’s adventures — although, we never once care about anything that’s happening. It’s just one man not wanting to take responsibility for his own actions. There’s no reason to sit through the film unless you’re a huge Clooney/Roberts fan. Do those people even go to the theater anymore? When’s the last time either of them managed to open big? Not even Foster can make a reasonable excuse to head out for this one. She’s never been the best director, but she does inject a little excitement during the second half of the film.

By then you’ll probably have fallen asleep. It’s not a total misfire, but not really worth checking out either.