The film 'Her' wished it was. Made for sci-fi fans and anyone looking for something more heady before the summer season explodes. 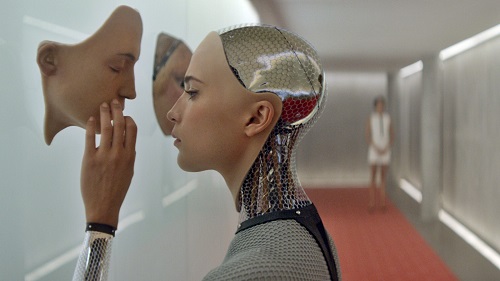 The name Alex Garland may not ring a bell, but the films he’s written might. Frequent collaborator to director Danny Boyle, he’s been responsible for 28 Days Later, Sunshine, and the source novel of The Beach. While typically divisive, one thing you can always count on is a bonkers twist as his films always take a left turn in the third act. The same goes for his appropriately titled directorial debut Ex Machina. Don’t be too upset when things go exactly how you think they will, but you can’t say the title didn’t warn you.

Caleb (Domhnall Gleason) is a computer programmer who has just won the chance of a lifetime: to work alongside reclusive CEO Nathan (Oscar Isaac) for a week. Traveling to Nathan’s secluded mountain home, Caleb learns he’s been brought on board to perform a “Turing Test” on an artificially intelligent humanoid named Ava (Alicia Vikander). Bewildered with the opportunity, Caleb is set up with daily, interactive tests to see if Ava can pass.  Soon enough, a game of cat and mouse is afoot, with Nathan slowly revealing ulterior motives while Caleb starts to fall in love with their subject.

A lot of protégés have been making their directorial debuts lately. (Christopher Nolan’s cinematographer Wally Pfister recently crashed and burned with Transcendence.) Thankfully, Garland keeps his film wrapped in mystery and has an amazing cast. Gleason continues to prove his leading man chops in About Time were no fluke, giving his computer programmer the right amount of everyman to go along with the scientific babble. Vikander proves she’s more than just a pretty face, finally getting a role in a Hollywood film that gives her the chance to act.

And then there’s Isaac. To say he’s one of the best actors working today is no understatement. While he may look like the love child of David Krumholtz and Jake Johnson, he always gives a tour de force performance, no matter the role. From Inside Llewyn Davis to A Most Violent Year to Ex Machina and his upcoming role in Star Wars, the man excels at character acting with the best of them and there appears to be no slowing him down.

As for Garland’s writing/directing, we already know he’s got the screenplay-side down pat, so how does he fare in the director’s chair? Every bit as fantastic. Ex Machina may wind up as the year’s sexiest thriller, but there’s plenty of mind-games afoot amongst the characters to keep you on the edge of your seat. It’s also got a dash of the weird, and a sense of humor to boot. This is the film Her wished it was, and it’s so far flying under the radar, but make no mistake, this is one of the year’s must-see films.